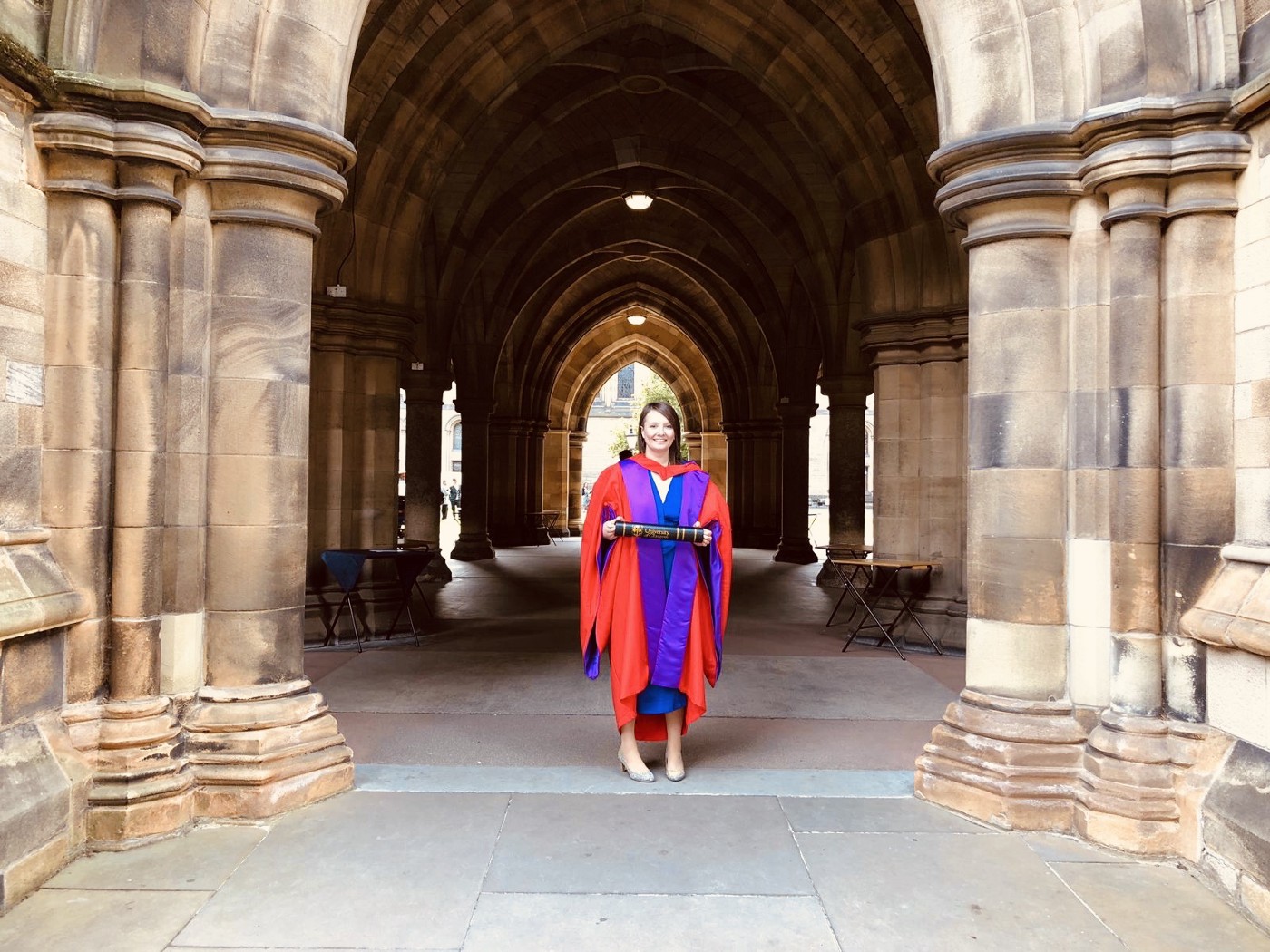 Ten years ago to the day I graduated from my degree in Product Design at Glasgow School of Art.

I’ve always been a huge supporter of the school and the course, and since leaving myself, I’ve had the pleasure of working with their graduates to help us in designing a world that’s more human. Which is why it means so much to me to be recognised by the institution I honed my craft in.

Today I was given an honorary doctorate from the Glasgow School of Art. For ten years I’ve contributed to the field building of Service Design in Scotland and I’m hugely grateful to be recognised for the contribution I’ve made to the sector.

All of this wouldn’t have been possible without the huge contribution of everyone in Snook, past and present, and the collaborators we’ve supported or been supported by along the way.

Below is the speech I gave to the graduating students of the GSA on Friday 14th June, 2019.

And thank you to the art school for this award. I’m accepting with the deepest gratitude for all the foundations you set in place during my education here.

I was told to move to London and get the portfolio out. Like you, exactly ten years ago to the day I was sitting in the same chair as you. I had three thousand pounds of debt in the bank, a student loan, and an impending move out day — needless to say, I was a little scared.

If you’re sitting here thinking, oh god, what am I going to do now? It’s ok if you don’t know what you’re going to do, neither did I. And I’ll let you into a little secret, none of us have cracked it, even your parents, we’re all hopelessly trying to do our best all of the time.

But I promise you, whatever happens next, will work out for you. I put most of my trust into my lifelong hero David Bowie, he said;

‘I don’t know where I’m going from here, but I promise it won’t be boring.’

My career to date has been a bit of a happy accident and lots of hard work, and certainly not boring.

The day after I graduated, I attended a competition called Social Innovation Camp. They asked the public for ideas that could drive social innovation. I had developed an idea called MyPolice after my house was burgled and I couldn’t give constructive feedback to the police.

I went onto win that competition, gain investment and launch the UK’s first online police feedback tool. It wasn’t easy but that’s a story for another time. But this was my first lesson in putting yourself out there and just trying something. Funnily enough, that ‘trying something’ ended us up with some investment. I had NO idea what I was doing.

At the same time I was offered a rather unique position at Skills Development Scotland to bring design into the public sector. At the time, there wasn’t many examples to look around and find support on how to do this, so I got on with trying to re-design career services for the Scottish Government.

Being a designer in Government was weird, I was the odd one out. I had been catapulted from spending time with ‘my kind’, my fellow weirdos of the art school. The misfits, the activists, the flamboyantly dressed, the queer, the problem solvers, the creatives.

Here, in Government, I was nicknamed the felt tip fairy. I was noticeably different. Where endless conversations happened in back to back meetings, I sketched solutions. Where the walls were draped with ‘hands off my milk posters’ I filled them with sketches, photographs, maps, insights from the public, breaking their no blu track rule. I brought what I knew of the design studio to the Government.

It was here, very quickly during my masters year, that I recognised how valuable my education at the art school had been.

Art schools are places for the people who think and see the world differently, But what’s even more unique than being a home for the weird and wonderful, is that it gives us the tools to express our ideas through form, which in turn changes how we think. And I think that’s the greatest gift art schools can give us.

We’re not taught to accept the world the way it is, but to re-design it, re-think it, and stimulate critical debate through making.

– The way we dare to dream of alternative realities and systems — that’s unique.

Everything about what you’ve been taught here makes you a unique individual. You might not even recognise it yet, I certainly didn’t, but you have skills and talent that most people got knocked out of them at a very young age. You’ve nurtured these unique skills for years, put them into practice, tried and failed countless times in order to hone your ability to think through making. It might not sound special, it might seem normal right now, but outside the walls of the art school, you have something beautiful to bring to the world.

We’re taught not to dream big anymore. We’re taught to fall in line, perform, get tested and hope for the best. That’s not what we need.

The graduates of this art school and our friends in other creative institutions have gone on to shape and begin moulding the world they want to see. You’ve managed to circumnavigate falling in line.

I’ve taken that sentiment into my work for the past decade.

After my Government stint, I set up Snook with my co-founder Lauren Currie. I’ve run it now for ten years. I’ve hired countless graduates from the art school and I’m proud to continue to lead the company in supporting over 30 people’s livelihoods in Scotland and London. When I graduated there was a recession, and the promise of going to university made by the Government, that it would result in a job now felt meaningless. We felt screwed over, but instead of getting angry, we saw an opportunity to invent our own jobs in Scotland, as Service Designers. It’s safe to say at that time in Scotland, there was no marketplace, little appetite and not many examples of what we were doing at the time in the public domain, you could have called it naivety. Ten years on — Scottish Government is hoovering up designers, we have a new chief office of the designer and there are countless people across the country talking about the Scottish Approach to Service Design, ensuring that we design the most inclusive and human-centred services in the world. And Snook’s contribution to building the market and appetite has been recognised by Government.

We’ve done this through co-designing services with the public. Using design to bridge the gap between state and citizens.

But Service design isn’t just in Scotland — there’s a whole world out there — I’ve had the privilege to share our work and travel to Oman, Australia, America, Europe, I even met Santa Clause in LapLand once, talking to Governments and public sector bodies on designing better services

That’s what I get a kick out of. Whilst I’ve said throughout this speech today that our craft is unique, and deeply learned, the most humble thing we can do is to give it away by inviting people in to use it and respecting that in some way, we all design everyday.

My team and I at Snook have taught 1000s of people in organisations across the world how to use design and creative thinking to solve the problems they experience. I can’t tell you how much I get a kick out of seeing people who say ‘I can’t draw’ or look immensely uncomfortable get to grips with designful ways to build ideas, sketch them and test them. When you give people the gift of making, you unleash a creative autonomy that most people deny they have, yet I know it lives within them. When we arm our networks with design, we scale an army of people who have the ability to co-create a world with us that’s more human. So give the skills you learned away.

It’s important to note with all I’ve said, and I’m open about my own personal struggles in doing this, it’s not been easy. And I’d never want to stand up here and promote a message of ‘it’s easy’.

There’s been times I’ve cried on the kitchen floor, stayed awake for days to finish proposals, pushed friends away as I’ve focused on work and carry the burden of people’s livelihoods on my shoulders.

Working hard to change the world doesn’t mean killing yourself in the process. If you want to look after everyone else you first have to look after yourself.

So, from today, what are you going to change?

When I graduated the financial crash was just hitting, and Labour was still in power. Things didn’t look great, but they’ve got a whole lot harder now. We’re living in a time of austerity that personally I believe has crippled the people who needed support the most in our society.

There’s an ever extending list of demands that need the skills you have. I hope you’re ready for the challenge.

“One in 55 people in the UK is a wheelchair user…So where are they?”

We have an inclusive design challenge. How do we redesign design so we make sure that we are truly creating an inclusive and human world we can all live in and participate in designing?

I could stand here all day and list challenges that need your help. Whether you focused in textiles or interior, product or photography, you have the skills to take these on.

So I stand here today and ask you — what are you going to challenge?

Don’t become apathetic. You have a responsibility to go on and shape the world for good.

“You never change things by fighting the existing reality. To change something, build a new model that makes the existing model obsolete”

That is exactly the talent you have and what you need to do. Don’t waste it. Do something with it.

Design is a super power.

“We are called to be architects of the future, not its victims”